We’d been to this funeral home twice before—at least, I think we had? I guess it sounds heartless but they blend together, with their signs calligraphed with the family name, the floral arrangements and folded programs, the standard chairs in the standard rows. Even the silence feels uniform in these places. They must all use the same sound proofing.

I followed Cat inside, making intermittent eye contact with strangers and smiling a closemouthed half-smile, the facial expression that is also uniform at funerals. Mr. Braverman’s service was standing room only, and we took positions at the back. It was nice to see an overflowing crowd; I hate the funerals with just a few souls huddled in their misery like animals outside in a storm. Here I saw little kids dressed up and fidgeting in the second row. Some people don’t like children at a service but I think it helps everyone to remember the promise of youth in the world. I don’t know what it’s like for the kids.

An elderly woman in pearls entered the room, and from the way heads swiveled in her direction I took her to be Mrs. Braverman. Her clothes, though elegant, looked at least a size too large, bought for the woman she used to be. Her eyes were hooded and vacant until they lit on Cat, who stepped forward to meet her. They hugged for a long time.

“Thank you for being here,” Mrs. Braverman said as they let go, and Cat said, “Of course.”

The widow’s eyes grazed across me and Cat added, “This is my friend Trish.”

Mrs. Braverman bobbed her head and moved on. I didn’t bother to tell her I was sorry for her loss; my presence didn’t matter and neither would my words. We came for the hug between her and Cat, who had located Mr. Braverman’s most accommodating vein and rubbed his necrotic feet and emptied his catheter bag and washed his wasted body and left the imprint of Mrs. Braverman’s lipstick kiss on his cheek when he died. Cat was here for Mrs. Braverman. I was here for Cat.

The first time I met Cat she was out with her work friends at the Red Sombrero and they were all drunk off their asses. I was with my work friends too, but we were admin assistants too poverty-stricken and subservient to cause much of a ruckus—if one of us spilled beer on the table another would rush to wipe it up. I’d been at the job a month and wanted desperately to be promoted, provided I didn’t die of boredom first. I’d spent my twenties playing in a band, with nothing to show for it, and now I wanted a steady income and benefits, I wanted to buy a condo and adopt a dog. Sleeping in a real bed night after night still seemed like a luxury to me, a dangling prize that could be snatched away at any time.

Nonetheless I couldn’t help but turn my head when I heard those women whooping and hollering on the other side of the bar. They were playing the most reckless and violent game of darts I’d ever seen. Darts bombed the wall below the target. One woman took a hit to the thigh, howling with pain as the others only shrieked with laughter. When our waitress, with whom I’d been low-key flirting, brought our second round, I tried to offer her some sympathy.

“Rough customers over there?”

She glanced over, shrugged. “Every Friday they tear the place up. You can’t say anything to them though.”

“Because of where they work.” She jerked her head to the side. “Up the street. You know they have to cut loose.”

I didn’t know what she meant—this wasn’t my neighborhood—but Molly, who sat in the cubicle three down from mine, was nodding vigorously. “Makes sense,” she said.

“What makes sense?” I said.

A dart sailed across the bar and landed near my shoe. I picked it up and carried it over.

“You have a license for this thing?” I said. The nurses were busy yelling at each other about what shitty throwers they were, and not one of them acknowledged me or took the dart back. I lingered there, like an idiot. Finally one of them turned and said, “Oh shit, sorry,” and grabbed it, but I held on. She was wearing dark blue scrubs with a long-sleeved white T-shirt underneath, and shiny white soccer shoes, and her long straight black hair was also shiny. In my memory all of her was gleaming. She tried to take the dart from me and I wouldn’t give it until she told me her name. When I let go, my palm was pricked with blood. We live together now in Cat’s condo with a dachshund named Murray who has hip dysplasia and a terrible personality and whose presence in our lives is my greatest regret. I know I’m lucky to have such a manageable regret. I’m lucky in a lot of ways.

To read the rest of this story, please purchase a copy of issue #10 or subscribe to the magazine.

The spring 2021 issue will ship in April. 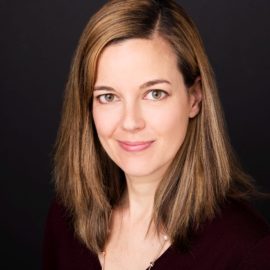 Alix Ohlin is the author of five books and two short story collections. Her most recent collection, We Want What We Want, was published by House of Anansi Press in 2021. It was shortlisted for the 2021 Atwood Gibson Writers’ Trust Fiction Prize and ReLit Award for short fiction. Her novel, Dual Citizens, like her …