Fish can drown. Well, they suffocate in water in which there is little or no oxygen dissolved but, technically, water suffocates humans as well. The gills of fish can even process oxygen from the air but the delicate structures dry and are destroyed and then the animal dies.

We can’t take a single breath under water because our throats will slam shut and our own defenses kill. It isn’t a sign of paranoia. No one calls a drowning man a conspiracy nut. Count back from 100, take deep breaths, go to sleep.

Whenever I returned to the reservoir where I grew up fishing, I could hear the water falling in a thin sheet over the concrete wall to the shale below. I would toss a line and bobber out and wait. Get startled when beavers slapped the surface.

The fence there is high around the dam and water. After 9/11 you can never be too careful because someone might poison the town’s water supply even though they don’t draw the water from there anymore. Not many towns are still drinking surface water; even town tap water is well-water most times nowadays. The conspiracy nuts still say they can taste the fluoride.

Fluoride is odorless and flavorless, so those who say they can taste it only appear silly when they insist. It saves teeth, changes the shape of human enzymes, is used in the manufacture of uranium fuel for nuclear weapons, but it’s flavorless.

The water in the reservoir is still, framed with spruce climbing uphill from the water’s edges in all directions. A rope swing still hangs where I burned myself once.

There’s no reason to be angry about the Styrofoam cup, Eleanor Eleanor, it is slow to breakdown but it’s hidden in the leaves and only people would dig it up. Even with spray paint on it and a bottle cap.

There are fish out there, some carp-suckers, brookies too. Some as long as 12 inches. Any bigger, they don’t taste as good anyway, it’s a waste. Fat is sometimes better than long, as long as it isn’t just eggs. No use for those.

I can’t live beneath the surface as long as fish can live above it. If we switch places, they won’t be thinking of me like I would be thinking about them. I’d be wondering, counting, contemplating patience and sentience and obeisance. They’d lie on the bank struggling to breathe, of single mind, of single purpose, not afraid or confused, only working under new and deadly conditions. Waiting for their lot to change.

I don’t know at what rate time passes for a trout. I wonder if our internal clocks are timed to our heartbeats like an electric clock uses the frequency of the electrical system. In the United States, 60 hertz, so 60 cycles per second. In fact, prior to being named after Hertz (who coincidentally died of suffocation at age 36 due to granulomatosis) the measurement was called cycles per second. A clock, plugged into the wall, counts 60 cycles and then ticks off one second. You can confuse clocks by taking them to Europe, even if they will work on 220 volts instead of 110 volts without catching fire.

In Europe, the electrical system works on a frequency of 50 hertz, so the American clock ticks off a second 10 cycles too late. As many of us know, time slows down in Europe. Unless you’re a tourist.

So when I bring a trout into the dry world, what happens to the cycles? No doubt his heart speeds up. When my heart races from fear or exertion, time slows. This is the reverse from the clock and Hertz. For me and not the clock, the cycles per second increase, and time slows.

I’ve now watched a car frame bend around me. Seen the glass from all four side-windows shatter into thumbnail-sized pieces and swirl through the passenger compartment, all around us, so slowly I felt I could have pulled pieces down one at a time. Of course my arms were also stuck in a slower space. So was her hair. I remember her hair, floating among the chips of glass. Only my mind, following the meter of my heart, had accelerated. Sounds didn’t lower in pitch like cartoon slow-motion sounds do. Glass breaking simply sounded like glass breaking. Screams were screams, although they seemed much longer.

By that reckoning, drowning probably takes hours. Gasping as the gills dry out must take trout-hours. With these physiological changes, how is the substance of the fish altered? I mean, I don’t believe fish are afraid because I don’t believe fish understand the finality of death, nor do they even understand that they are dying, nor do they even have a sense of self. Fear requires consciousness beyond mere preference. If their hearts are racing, and their entire system is reacting chemically to the hostile environment, isn’t the meat altered by a final-moments-corticoid-bath?

Further, would not every predated thing would have this reaction? Every mouthful of a kill in nature would be saturated. Even scavengers would be consuming these same, since no animal dies a pleasant death in the wild. Animals do not peacefully drift off in the wild. The weak, sick, and old suffer until they can no longer achieve water, food, or escape.

The only peaceful way out is the unexpected instantaneous death of a healthy animal or fully-convinced suicide. Animal suicide? There are those that believe that even Flipper, the chatty dolphin from the corny television show, committed suicide rather than continue to live blistered from the sun, trapped in a shallow tank. Some believe the little polar bear, Knut, committed suicide at four years of age in a Berlin zoo, although I confess I don’t know how old that would be in bear years. To conceive of suicidal release, however, requires a long chain of complex reasoning. Analysis, synthesis, and evaluation. First to comprehend death, then to have a sense of self, and then to combine those two into a sense of one’s own mortality. Then to understand the beauty and tragedy of choice and free will. Next, to make a judgment that death would be preferable to continued life, which requires hope and belief that, at worst, death would bring a great nothingness and, at best, something better. This sort of higher order thinking seems a tall order for animals, even for dolphins or bears, not to mention religious fundamentalists.

For animals, short of suicide, only an accident or a hunter could provide an animal with a peaceful death. Choice or preordination. A deer might be chased onto thin ice, crash through, and be killed by a pack of wolves in knee-deep freezing water, strangled, torn open. Or a well-placed bullet could turn the deer off instantly. Or maybe that’s all bullshit just to make hunters feel better.

I’ve been on both ends of guns. Like most humans, I prefer the end that makes me consider my potential and actual complicity in the death of something else, and not the end that shifts my clock to 50 hertz or less. Like a car accident.

When they drowned me in anesthetic, they told me to count. At first I was afraid and then as the cycles slowed time, I had time to contemplate all this. I had time to think without priority. Fish and Hertz and animal suicide became as important as my wife dying beside me. When that passed, I progressed into a state of passive confusion. They fish-brained me. I just lay there hoping for my lot to change, without really knowing what it was. 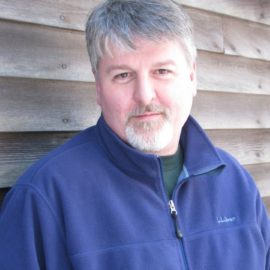 Kevin St. Jarre is an adjunct professor and high school teacher. He was raised in Maine’s northernmost town, Madawaska, and served in U.S. Army Intelligence for six years, stationed in Germany, Saudi Arabia, and Iraq. He earned a B.S. in English from the University of Maine at Fort Kent and an M.F.A. in Creative Writing …