She wore a plain brown scarf on her head, dark crow’s wings of hair peeking out from the rough cloth, framing a pale, thin face. A young boy, with the body of a three-year-old but the large round head of a much older child, pulled at her skirt, also rough but with a bright, flowered pattern. The man standing behind her in line smelled a strong but pleasant scent of woodsmoke and bread. Her purchase, still waiting to be bagged, included potatoes, cabbage, onions, some other root vegetables he wasn’t familiar with, two pounds of cheese, and a gallon of whole milk. He looked at his own groceries on the conveyor behind the red rubber divider—a T-bone steak, a six-pack of Rainier in cans, and a package of fudge-covered Oreos—and felt vaguely guilty. The college-aged woman at the cash register looked at him and smiled. She was a little plump but in a sexy way, her arms round but skin taut as if she worked out, her face flushed with health, with large brown eyes and even white teeth. He closed his mouth and with his tongue quickly checked his own teeth for remnants of the sausage he’d sampled twice at the deli.

The smile disappeared from the cashier’s face. She turned to the register as if carrying a great burden, tapped a few buttons, and then turned back and counted three dollar bills into the other woman’s hand. The woman looked confused.

“Because that’s what you asked for,” the cashier said in the slow, loud tones of someone talking to the hard-of-hearing.

The Russian woman tried to explain that she needed more. When the cashier finally understood that she wanted twenty dollars back, the answer was no, the sale was already cashed out for three dollars over. The woman stared into her purse, her credit card and the three bills held awkwardly in her other hand. A teenager wearing a blue smock and a poorly knotted tie finally came by to bag her groceries. The young boy watched him with his silent, round face.

The Soviet pavilion had been a hit here during World Expo ’74, and its staff members had returned home with favorable reports of their experience. After the fall of the Soviet Union, the city’s small Russian population had grown; the man knew a couple from Omsk who attended his church. He was about to say he had heard the woman ask for twenty when she closed her purse and with difficulty grabbed a full bag in each arm. She said something in Russian to her son, who began walking slightly ahead of her.

“I always get her,” the cashier sighed. Then she laughed. “Where do these gypsies come from?” A husband and wife waiting in line laughed, too. The man with the meat and beer and cookies didn’t think it was funny, but he smiled and made a chuckling noise just to be polite. As he watched his dinner being scanned, he suddenly wondered, Why? Why was he being polite to these people? He wanted to run after the Russian woman and ask her if she needed help loading her groceries into her car. What if she didn’t own a car? How would she keep an eye on her son and make it home in a strange land where cashiers can’t see past the rough, old-world cut of some cloth, where even the good guys can’t see past their own desire to flirt with younger women and be included in the crowd?

He looked back at the cashier. Her face was pink. Her eyes were small, round, and glistening. He could have sworn she was leering at him. 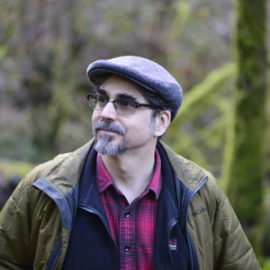 Jeff Fearnside is the author of Making Love While Meditating Three Feet in the Air. His fiction has appeared widely in literary journals and anthologies, such as The Pinch, Rosebud, Many Mountains Moving, Crab Orchard Review, and—most recently—Fourteen Hills, Pacific Review, Soundings East, and Everywhere Stories: Short Fiction from a Small Planet (Press 53). National …