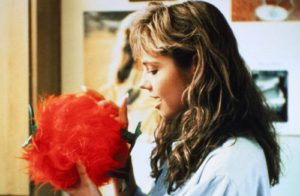 For me, the best way to spend a foggy October night is to indulge in a cheeky, horror film spoof, preferably one involving a sweet transvestite and a few catchy musical numbers. But, Netflix doesn’t stream Rocky Horror Picture Show, so I settled on a similarly, seemingly spoof-tacular horror one—The Return of the Killer Tomatoes.

Return of the Killer Tomatoes is the sequel to the 1978 classic, Attack of the Killer Tomatoes, where mutant over-sized tomatoes take over the world, start killing people, and can only be stopped by the song “Puberty Love,” which shrinks them down to a crushable size. The sequel picks up a decade later with the nephew of one of the original tomato busters and his best friend, George Clooney, working in a tomato-free pizza parlor and trying to pick up women the only way they know how—by pretending they know Rob Lowe.

As I sat down to watch, my immersion into the world of homicidal tomatoes was immediately interrupted by “Big Breasted Girls” frolicking on the beach on my computer screen. I took a moment to ponder whether or not I had accidently stumbled upon the adult section of Netflix when the movie switched gears to the appointed plot line. By the end of the movie, the audience is given an explanation for the oddly woven intro (the busty blondes are actually tomato-humans and appear to be members of Clooney’s newly established harem). Even with such a clear explanation, I was still left with the uncomfortable sensation of my feminist soul revolting at the characterization of women. (As a millennial, I’m less cultured in traditional mid ‘80s cinema and figured that it was a stylistic choice of films of this era to have a brief pornographic interlude to draw in male viewers.)

When the movie got back on course, though, I was pleased by the catchy intro music, essentially a jingle repeating the movie’s title long enough for it to be etched in your brain for hours, and began to understand the world of killer tomatoes as I was given flashbacks to the original “Attack.” I quickly found myself settling comfortably into this world and began to laugh at the corny jokes and moments where the fourth wall was broken to explain the film’s low budget, which was soon expanded with intentionally obvious product placements.

I liked these characters; I felt for their goofy ways. I even liked Clooney’s portrayal of the stereotypical girl-crazy jerk with a deeply buried heart of gold. However, I realized that I was only sympathizing with the two main male characters of the film, and not the supposed heroine of the film, Tara.

The leading lady is actually a tomato made into a human, courtesy of the infamous Dr. Gangrene, the evil scientist responsible for the killer tomatoes in the first place. Gangrene created Tara to be the perfect combination of 1950s housewife and robot. Tara prides herself on four things: speaking perfect English, cooking 815 international dishes, performing 637 sexual acts, and using all the popular home appliances. While these are impressive skills, for them to be the main point of pride for a woman is demoralizing—though of course, because the film is a spoof, the creators are trying to poke fun at the stereotypes and expectations revolving around women, and the irritation I felt was carefully crafted to ensure such a response.

Despite whatever plans were deftly made to highlight misogynistic gender roles, they are unable to remove the underlying sexism completely. Tara’s true moment of triumph is when she saves a furry mutated tomato named F.T. from destruction by both Dr. Gangrene and the tomato-phobic public. It is only when Tara embraces her maternal need to nurture that she is able to contribute to saving the day; society’s perception of acceptable behavior for women confines what actions Tara can takes as a heroine.

Although the feminist movement has gained significant momentum with the evolution of social media, I’ve found the roles women are allowed to play—both in cinema and everyday life—have not really changed in the nearly 40 years since the movie’s release. If I were to grab a copy of Cosmopolitan off a nearby newsstand, the articles would read nearly the same in 2014: the ideal woman must cook, clean, have the appropriate level of kinkiness, and be able to hold a conversation with all of her man’s acquaintances. Added to that, after we’re married, we must hold a high power job, but still make time for the PTA while maintaining our sex appeal. Oh, and of course we must be married. The conversations on expectations for women are taking place online and outside the confines of the internet with women debating if they can really have it all.

Tara’s skills in the film, which are intended to make us roll our eyes and laugh over the preposterous nature, are still what a majority of women are aiming for, if perhaps not in such simplistic terms. Tara’s story is remarkably close to the narrative of constant accomplishment that goes on in the modern woman’s head, which begs: How different is this spoof of a story from the ones we’re still telling today?