When we moved to the United States, my big brother Itan worried that the kids at school would make fun of my hand. I wasn’t worried; I knew for certain that they would, just as they had back in Israel. Even the insults were the same: “Why do you have a claw? Are you an animal?” Everywhere in the world, kids are equally unoriginal. But I didn’t anticipate that they would also make fun of things that were perfectly normal in Israel—my accent, my name. When the teachers were out of earshot, many kids called me Ori-o, as in, “Hey, Ori-o, show us your cream filling!”

There were other variations too. “What’s wrong with your claw, Ori-ngutan?”

“It’s called Klumpke’s paralysis,” I explained, just as my mother, my Eema, had taught me to say. “It’s something I was born with, and it makes me special.”

The girl hooted. “Born with it? So, your parents are dumb gorillas too?”

I raised my chin at her. “My mother could strangle you with her bare hands,” I declared.

“If you got your Ori-ngutan hand from her, I’m not too worried!” the girl chortled, and all her friends bayed, shrill hyenas that they were.

If they only knew who my Eema was, they would never dare mess with us; they would be too terrified. Those dumb bullies wouldn’t listen to me, but Daniela and Paisley did. The three of us knew each other from International Club, and Daniela and I had organized the fall bake sale fundraiser together. On the days that the popular table was too full for them, they let me join them at their backup cafeteria table.

I wanted them to understand about Eema, and spread the word, so I told them everything: how she once—single-handed and unarmed—took down two would-be suicide bombers in a hundred degree heat. She was also one of the Israel Defense Force’s very first female jet fighter pilots. Her commander told her that she had “killer instincts” and begged her to make the army her career, but she had already extended her service three times. By the time she was twenty-six, she had spent her entire adult life serving her country. She left the IDF because she wanted to see what the world had to offer: attend college, hold a job, travel outside of the country. And yet, I explained, if our country needed her, she would reenlist in a heartbeat; she was a consummate patriot. (I had just learned the word “consummate” in English class and I liked the way it sounded.) With her experience, she could even skip retraining and jump right back into the IDF at the rank she’d left off, as a seren.

“How many people has your mother killed?” Paisley asked. I saw her share a long look with Daniela, but I didn’t know what it meant.

“Dozens,” I said, which was probably true. Eema had never given me a straight answer.

“Remind us not to come over to your house,” Daniela said. “I’m too young to die.”

“She wouldn’t hurt you,” I assured them. “She only hurts bad guys.” My Eema wasn’t some mindless war machine. She fought on behalf of her fellow Israelis, for those too old or sick to defend themselves.  And when we returned to Israel someday, and I climbed the ranks of the IDF, I would do the same.

Eema, Itan, and I left Netanya five years ago, when I was nine. But we didn’t move into our two-bedroom near Flatbush right away; we spent almost a year at Uncle Nadav’s house in Gowanus first. His two sons shared one bedroom so that Itan and I could share the other. Eema slept on the couch in Nadav’s basement.

At the time, I asked her why we were living with Uncle Nadav instead of getting our own place. She explained that moving to a new country could be lonely, and she wanted Itan and me to get to know our aunt and uncle and cousins. Later, I shared Eema’s logic with Itan, and he said, “Ori, don’t be an idiot. It’s because she can’t afford to rent any place.”

Whatever she said about it, I could tell that Eema was glad when we moved out of Nadav’s. He forbade smoking in his house, so Eema used to sneak out onto the shoebox-sized balcony, bundled in the winter jacket that Nadav’s wife had given her, the cigarette quaking in her numb fingers. “I feel like a Siberian prisoner,” she had complained.

Once we finally got our own place, about four years ago when I was ten, we’d worked hard to make it cheerful, homey—Israeli. Our walls were covered in prints and sketches from minor Israeli artists, pictures of sunbathing, semi-nude women and beach landscapes, competing for space and edging each other off the walls. Every time Eema got a sales bonus from Nordstrom—which was often, because she could sell sand to a Bedouin—we bought a new picture, or a ceramic pomegranate to line our bookcases and tabletops. The kitchen was always a harmonious mess: mounds of vegetables lounging about, hoping to become salatim; receipts and bills waiting to be sorted and paid; overflowing ashtrays ready to be emptied. Once, my biology partner from school came over to finish a write-up and said, “Don’t take this the wrong way, but your house smells.”

Why would I take it the wrong way? It smelled of home: the combination of pickling vegetables, homemade date bread or halva, and stale Marlboros. “I know,” I told him.

As Eema said, our apartment was bayiti, especially compared to, say, Daniela’s giant house in Ditmus Park, or Paisley’s Park Slope penthouse, which I’d visited to work on group projects; they felt sterile and impersonal, like hotels. We’d been in the apartment for years, but it wasn’t until last fall, when Itan left for college, that I really came to love it. I missed him, but I’d never had my own bedroom before. The freedom and privacy were delicious. However, Eema also expected me to take over Itan’s old chores. But when I started to tell Eema that I wasn’t sure how I would cook and wash dishes by myself, she interrupted me.

“What is this? You’re becoming too American. Israeli women don’t talk like this.”

“It doesn’t matter if you’re American or Israeli, I don’t know how anyone can wash dishes with one hand—”

“Of course there is a way,” she cut in. “We just need to figure out what it is. You handle yourself at school, no? It’s just because your brother was here at home to help you, treating you like a child, that you got lazy. You’re a strong, independent woman and it’s time you started living like one.”

To continue reading this story, please purchase a print copy of issue #8. Photo courtesy of Min Lee; view more of his work on Flickr. 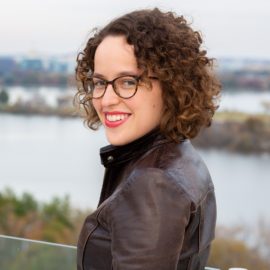 Emily Mirengoff’s fiction has appeared in Lunch Ticket, Santa Monica Review, Yemassee, and is forthcoming in Sonora Review. Mirengoff earned her B.A. in history from Dartmouth College and her M.A. in Communication from the University of Miami. She has read for Electric Literature, Ruminate, and the Center for Fiction and attended the Bread Loaf Writers …