In the movie, when Dracula moves from Transylvania to London, the first thing he does is crash the opera, and starts making the moves on the ladies. In particular he’s interested in Miss Mina (Helen Chandler), though Mina’s friend Miss Lucy (Frances Dade) has the hots for Dracula just a little bit more. Soon after Dracula chats them up, the women are combing their hair and gossiping about how great Dracula is. Mina mentions she wants someone more “normal” to which Lucy dismissively says, “Like John?” As I eluded to before, John Harker (David Manners), is practically swimming in his giant I-go-to-the-country-club pants, and plays the white-bread-boy character with unintentional irony. John isn’t nearly as cool or interesting as Dracula. This guy is a bro of the same ilk as Jack from King Kong, and I love imagining a spin-off movie where the two of them just get their own movie where they play flip-cup and argue about fantasy football. If John were absent in Dracula, it would free-up the movie from having to be saddled with a traditional hero, and then maybe Dracula would win! There’s a great scene towards the end when Mina—partially under Dracula’s power—tells John that “it’s all over.” The finality of her tone has the shadow of a real break-up, and for a second you get the notion that Mina actually wants to be with Dracula, and this isn’t mind control at all.

If you’re wondering why monsters like Dracula have such power over us in general, it’s right here in this movie. Both Mina and Lucy were into Dracula arguably before he started using mind-powers, and even if they weren’t, we—the audience—totally were. Dracula is the taboo bad boy we might want to date if we weren’t so concerned with being careful. Bela Lugosi embodied the best taboo aspects of vampires, which started with Lord Ruthven and, of course, Carmilla. If the vampire is the biter, then—post-“Carmilla” and the cinematic 1931 Dracula—the bitee becomes complicit in the whole thing. We’re literally rooting for Dracula to win. These jokers he’s hanging out with aren’t ready for his sense of style and his crazy ideas about relationships. Lugosi’s Dracula is the sexy monster, the thing we wish we could either possess or become, if regular boring life wasn’t standing in the way.

Other non-vampire monster movies almost all take their cues from Dracula, specifically King Kong. We’re told by that movie’s meta-fictional-filmmaker Carl Denham that we’re watching a “Beauty and the Beast,” story, but that’s too simple. Fay Wray’s Ann Darrow in King Kong has way less agency than Miss Mina in Dracula, but Denham calling the whole thing a “Beauty and the Beast,” story is because he’s a flim-flam man, trying sell everyone on the idea that Ann Darrow might have learned to love Kong. And unlike Dracula, she doesn’t really. And could you blame her? What could they have in common?

The wider the gulf between a monster looking like a monster, the more the metaphor becomes uninteresting (and usually just about how terrible various kinds of men are). In 1954’s The Creature from the Black Lagoon, there are two men—not counting the titular creature—who are vying for the affections of the leading lady, Kay. One is the supposed nice guy David, and the other, Mark, who is a big time asshole. In these kinds of movies, we can often tell which guy is a huge jerk because he’ll be the one more willing to use violence against whoever the monster in the movie happens to be. Because we’re already kind of rooting for the monster in these situations (you get ‘em Dracula/King Kong/Gill-man!), siding against the monstrous human male who is foaming at the mouth for bloodshed becomes easy.

Even the original Godzilla (Gojira in Japan) wasn’t immune to this formula. Never, never forget: a major plot point in the classic first ever Godzilla is the fact that young-handsome boat-captain Hideto Ogata and his girlfriend Emiko, jointly decide to put their engagement announcement on hold because, duh, Godzilla is attacking! If monsters existed in real life, psychologists would probably see a pattern in people trying to weasel out of committed relationships because they’re afraid of “Dracula,” or “King Kong,” or “Godzilla.” In the newest 2014 incarnation of Godzilla, the screenwriters are either totally aware of this monster-as-home-wrecker theme, or are creepily unaware. Either way, the effect is the same. The new Godzilla doesn’t threaten the romances of any of the movie’s human characters, really, but instead, we’re told is only put upon this Earth to stop other monsters from having sex. Godzilla, in the 21st century, is a thing that monster-blocks his fellow monsters.

If your relationship can survive monsters, I suppose it’s a strong one, and that, maybe more than anything, is why we love monsters so much. We go on dates to scary movies or to haunted houses, in order to grab onto each other and test the ability that we can get through something as frightening as a vampire, or huge monkey. Dating someone who doesn’t like scary movies or haunted houses is fine, but you should still probably watch one with someone you love anyway, just to make sure you can both survive it. Part of why jerky-guys like John in Dracula are so lame, is their total disbelief in the existence of this far-out stuff in the first place. The idea there could even be a vampire, another way of living your life, another place to buy your pants, is just totally out of the possibilities of this character’s mental and emotional universe. Which is why, while watching the movie (or reading the book) we hate those characters and we want them to get what is coming to them. They’re boring. Dracula is exciting. 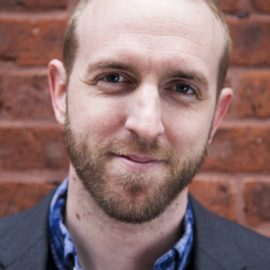 Ryan Britt a fiction writer, essayist, critic, playwright, storyteller, and teacher living in New York City. His work has appeared with The New York Times, Nerve, Omni, The Awl, The Drum, Crossed Genres, Good, Soon, Opium, Clarkesworld, and extensively on Tor.com, where he is a former staff writer and the creator of the “Genre in …