Two days ago, Renata made herself a promise: she would either fall in love again or kill herself.  The day after that, she’d went to a garden center and bought granite bricks, pale and perfect for lining a garden path. Renata filled up a backpack, drank a bottle of cabernet sauvignon, and looked at the websites of the lakes closest to her. Lake Orion, Wells Lake, Lake Lemon. The second day after that, she agreed to go on a date with a man named Lewis, whose user name was the bewildering CrowsWings210, but his messages to her were earnest with some attention given toward grammar.

It was her first date in six months. Renata put on lipstick, the kind that when she was younger was promise that everything that happened that night would become a story worth telling. The lipstick did not stop her from showing up twenty minutes early or from feeling sweaty, even though every time she touched her forward or fingertips, they felt perfectly dry

Renata pulled at her hair, pushing it behind her ears. Then combed it back forward and let it swing down onto her shoulders. She reminded herself everything with Lewis seemed nice so far.  But maybe, Renata thought, he was too nice? Her mother had taught her to always be wary of anything and anyone that was “too.” If it tasted too good, it would destroy your figure. If a man was too nice or too perfect, he was probably a secret serial killer. A man who went to the gym, was just making himself hot enough to leave you or strong enough to kill you.

She skimmed through some of the e-mails she’d exchanged with Lewis. There was the long thread about her former fiancée, Thomas.  She had told Lewis about how strange it was for him to be gone. On some level it was melodramatic to call it the accident, as if no one else in the history of the world had ever had an accident, but she couldn’t stop herself. She had written to him:

“I didn’t think I was ever going to have anything again. I was, I don’t know. A deflated balloon. I could only hover and be led around by people. I didn’t really even think of myself as a person. But I mean, it’s been two years. I’m ready.” She had originally written the e-mail in the present tense but hadn’t wanted to scare Lewis. It felt icky in a different way to see herself lying, trying to sell herself as brave.

Renata looked up hoping to see a bald man with a kind smile walking toward her. Nope. The walls were decorated with black and white photographs of buildings taken during a snowstorm. Renata hated them. And where was the waitress? Why had she chosen a restaurant where it took a million years to get a glass of wine?

Lewis had responded, “I want you to know that it’s important to me that you can write/talk to me about these things. It shows you’re getting better & it makes me actually feel like I’m your friend.”

The ampersand made her judge him, assume that in college he had written poetry on his social media accounts as a way to show how interesting and deep he once was.

They had exchanged their celebrity bang lists (She had surprised herself by putting John Cho at number one and John Oliver at number two. Maybe I just like the name John, she thought looking again at her list. His number one, Mila Kunis, was a little predictable, but she liked that Naomie Harris was his number two) and talked about their most embarrassing stories: fainting while reading a tabloid article about Bat Boy in a grocery store checkout line and believing uncles who said Big Foot was real and crying until he peed his pants on a family camping trip. I should be more worried, Renata thought, that we’ve already talked ourselves out.

A few days ago, Lewis had written to her about nostalgia. “I still wear a ripped up blue sweatshirt that I have from high school. I know on one level that it looks terrible, but it makes me feel good. And it makes me feel like the only things I have to worry about are doing my homework, listening to my dad talk to me about joining the track team to teach myself discipline & if I’ll ever be any good at playing guitar. I’m embarrassed to be thirty-three and to want someone else to tell me what to do. To think my life would be much better if I cared that much still.”

What he’d written resonated so strongly with Renata that her next message was suggesting they meet.

The waitress set down the wine and a bread basket and walked away before Renata could murmur thank you.

Maybe this restaurant is too romantic for a first date, Renata thought. She looked at her glass of wine as if it could respond. The sound system was playing what sounded like Louie Armstrong, but she couldn’t hear it well enough over the clink of dishes and the sounds of other talking. The overhead lights were dimmed; most of the light came from the candles on each table and the Edison lights hanging from the ceiling. I should’ve chosen a diner with lights like a grocery store or maybe something a little cooler, Renata thought. The whole fine dining thing might be a little too come and get it.

No one had called her that in years.

There was Thomas wearing a black t-shirt, jeans, a blazer. His dark hair long in the front, needing a trim like it always did.

Renata dropped her phone. It clattered and popped out of its plastic case.

Thomas smiled, raised his hand in a half-wave, and walked over to the table.

“Can I?” he asked. Before she could answer, Thomas sat down.

To read the rest of this story, please purchase a print copy of Story #7, Spring 2020. Photo courtesy of Marc Buehler; view more of his work on Flickr. 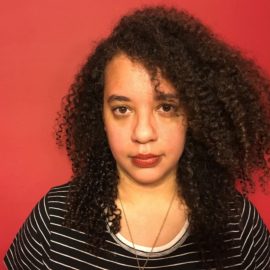 Megan Giddings’s debut novel, Lakewood, published by Amistad in March 2020, was an NPR Best Book of 2020 and one of New York Magazine’s 10 Best Books of 2020. Additionally, it was a Michigan Notable Book for 2021, a nominee for two NAACP Image Awards, and a finalist for the LA Times Ray Bradbury Book …