The Atlantic is unpredictable in September. A hurricane might gather in the Caribbean and disperse off the coast of the Carolinas, older and weaker. But its winds and currents stretch far like evil, invisible fingers and arrive at the little beach where Betty and Bill go before anybody expects them.

This is the beach where Betty learned to swim when she was just a girl. She knows the rip tides, the way they seduce quietly as summer ends, their danger intensified with the lifeguards gone. When she was a teenager, she’d come down to swim one September afternoon and a wave pulled her out past the edge of the jetty.

Her! A strong swimmer!

Luckily a fisherman jumped in after her and dragged her back to the rocks, where he’d been casting his lines into the waves. She still remembers the gash the rocks gave her leg, her blood sliding down the jetty as she stood there shivering, thanking him profusely.

Still, September is her favorite month. The tourists are gone, the water’s warm, the sky’s a different intensity of blue every day. At three, schoolchildren in their uniforms walk home, shouting and laughing. It’s darling, really.

It’s the perfect place to take your husband to swim, to read 50 Shades of Grey or the paper as the sun sinks, the perfect place to call your kids from your cell phone and tell them in hushed voice that yesterday he had his thing out with the Land’s End catalogue. That he forgot his own sister’s name. That he calls her Mom now, and not Betty. She’s not sure if he thinks she’s literally his mother or what. That he snaps his fingers at her when he wants something, pees the bed almost every night, you-know-whatted-himself at Mass last week.

It’s the perfect place to come down from her ledge. Her kids are soothing, offer to solve problems, remain remarkably calm. He’s their father after all. It’s their grief too.

It’s the perfect place to kill him.

Of course, that’s not how she sees it. The closest she gets is letting him go. And isn’t there something merciful about that? She saw the X-rays, gasped at how much his brain had literally shrunk. She’d seen specials on TV, known a man in the neighborhood who suffered from it for two decades. She knew what was coming. Why shouldn’t she save him from it?

To read the rest of this hybrid essay, please purchase a print copy of Story #5, Summer 2019 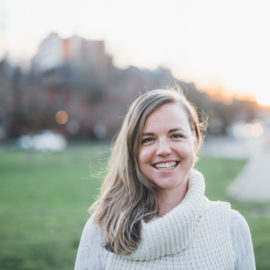 Annie McGreevy is the author of the novella Ciao, Suerte, from Nouvella Books. The novel is an intricate and emotional narrative centered around a family detonated by the Dirty War in Argentina during the early 1980s. Kermit Moyer, the author of Tumbling, said, “Annie McGreevy’s novella beautifully collapses the presumed distinction between the personal and …