Emma had never really considered her body, or rather, its temporality before. Illness was a little-thought-of inconvenience, something that came and then went, a brief interruption that required little in the way of meditation. A more formidable opponent as one grew old, perhaps, but that was a long way off. Illness had nothing to do with her.

When she talked about it later, she always began her story like this:

One day she had been healthy, and then one day she was not and would not ever be again. As the rest of the world glided over the threshold of a shiny new millennium, Emma went headlong into a series of symptoms and sicknesses that knocked one into the next like dominos until her previous good health was a distant memory, something both mystifying and completely irretrievable.

Emma hadn’t recalled ever seeing a heron before this time, but, since she had become ill, she seemed to see them all the time. No, that was exaggerating, not all of the time, but certainly she saw them a lot. Enough to be notable, to seem spiritual maybe. That kind of thing where something—almost always an animal, frequently a bird— keeps appearing over and over again, and often in strange and synchronistic ways, and with eerie timing, so that you begin telling stories about it, so much so that it sticks easily in the minds of others, family and friends, who begin to recognize it as your thing and start  buying you items with the likeness of the thing on it for every holiday or, you know,  just because: heron sweaters; photos of herons; text messages with images of herons laid over platitudes in contemporary fonts; a small grey heron made out of wool with a loop at the top, meant to be used as a Christmas ornament but hung up all year long.

It was easy to remember the first one. It was an egret, though she didn’t know that then. They were just driving along on a Saturday (or maybe it was a Sunday?) morning and she saw it at first just as a flash of color from the road above. Then: A bird. A snowy white bird. A big bird. It excited her. She had never seen a bird that large just standing there like that. She shouted for him to stop the car, to turn it around and go to the bird, to go down to where the bird was standing, down by a little creek. He listened. When the car was stopped, she jumped out of it and did the most ill-advised thing one can do when approaching a bird, which was to run. She started to jog towards it. She couldn’t help it.

And then, as if she was a player in a movie, she was suddenly next to it. Well, not next to it, it was in the middle of the water now, standing on a rock, but they were standing across from each other. Looking at each other. Both just standing still. After a moment of this—a minute? how long?—it stretched out its wings and then lifted off and began to glide along just above the water at a pace that she could keep up with, and she ran alongside it for a while until the whole thing felt so impossible and exciting that she started to shout. She couldn’t help it. Did he see this? Did he see what was happening? But he didn’t. It was only her running alongside the gorgeous, gliding bird, alongside the creek, tripping a little bit over rocks and bumps in the grass and her own feet. He was far behind now, and it was just her and the egret, which now, irritated with her shouting, flew straight up into a nearby tree.

“I didn’t know they could do that.” She jogged back to him out of breath.

“It doesn’t seem like they should be able to.”

They stood with their hands on their hips looking up or, alternatively, with one hand on their hip and the other shading their eyes as they looked up at it. It didn’t seem to fit in a tree. It sat, or stood, or perched there awkwardly as they gawked at it and talked about what they hadn’t known about herons.

The bird began swooping around as if to show off.

They watched it move from tree to tree. Emma took a blurry photo with her phone camera from much too far away. She pinched the screen to zoom in, but it didn’t help. A blur of white in the general shape of a bird surrounded by a pixelated curtain of green.

It began swooping around again.

She couldn’t remember now how long this went on.

Whenever she thought about it later, she remembered it as if it had been just her there, alone, and, really, it had.

To read the rest of this story, please purchase Issue #14 or subscribe to the magazine 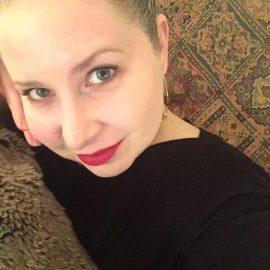