The guard opens a dating app during lunch and that’s where he sees the boy. His hair is a shaggy loose curl and his skin is brown like dry soil. He has a tiny scar on his face—a line across his cheekbone. The guard messages him something like, wyd? But what he wants to say is, you are the most beautiful boy I have ever seen. When the boy messages him back, the guard feels a little flip in his stomach, and walks back to his block smiling. A colleague asks him what he has to smile about. This colleague prides himself on being tough and using his height and girth to intimidate. The guard laughs, rapping his knuckles against the glass pod, creating a hollow bell.

He and the boy have been talking for a few weeks. They went from the dating app into texting, and moved quickly into talking on the phone, the guard lying on his bed, staring at the ceiling, his low mustard walls bare of art. Through the crackle of the speaker the guard talks with his hand on his stomach rising and falling. He wants to meet right away, he has imagined the feel of the boy’s skin, the heat of his breath. The boy tells him on the phone that he wants more time for them to know each other before they meet. Their conversations last hours.
A few things the guard has learned about the boy:

He has never had Japanese food.

He lives with his mother, who has health problems.

He turned 21 this past December, which makes him a Capricorn.

He has an internship with a youth non-profit, which pays him little but gives him free bus fare.

He gets the hiccups when he laughs.

A few things the boy has learned about the guard:

He financially supports his mother, who also has health problems.

He watches basketball and women’s tennis.

His go-to playlist is called Rap Queens, an assortment of female rappers.

He turned 27 this past September, which makes him a Libra.

He wants to take the boy out for dinner.

The guard does not refer to himself or his colleagues as guards. They call themselves COs to the outside world, which means Corrections Officer. To each other, they’re just officer. They are thick men, with sometimes ruddy faces. A few are Puerto Rican like him, with hair cut so close to the skull that the curl pattern can’t be seen. At 8 am on a Tuesday, the guard’s shift has just ended. He was frozen, a sixteen-hour shift. He wants gin—the astringent floral taste of clear alcohol. It’s morning but warm, and gin is how the guard imagines the coming summer. There is a motel bar down the street from the facility that is always open and has no windows. The bar is brown with fake leather booths along the wall. The bartender is older and Irish with a voice like shifting gravel. He likes cops and jokes, When are you going to pay your tabs, huh? In the year 3000.

Gin? What kind of faggy drink? One from the group says to the guard when he orders, someone he doesn’t like very much.

You care so much about what I drink? You gonna buy the next one, you in love with me or something? Everyone laughs, even the bartender.

They drink well into the day, gin and beer and whiskey. They become louder and louder, their voices and laughter crowding the bar, into the lobby. They stay all day because they don’t want to go home, and be alone. To go to sleep and wake up and come to work again.

When the two finally meet in person, the guard chooses a Japanese restaurant not far from either of them. He learned of the restaurant through an article in the paper, in a section on trends. Outside, a line of young white professionals wait for a table. When the boy arrives, they recognize each other immediately, from the dating app and also because no one else waiting for a table looks like them.

I have a reservation, the guard says.

The boy nods and smiles, but inside the restaurant the boy’s face changes. There is a bar with young people eating and drinking, and the tables are small and close to each other. Everything is brushed metal. The boy and the guard are seated in the middle of the room, and given menus that look like a lowercase list. The guard comments on the prices when he notices the boy looks small in the room.

Is this ok? The guard asks.

The boy says the restaurant is loud.

The boy nods, and when they step outside into the night air, the boy explains that he doesn’t like being in crowded places or loud rooms. The guard feels embarrassed at choosing this restaurant, trying to be someone he isn’t.

To read the rest of this story, please purchase a copy of issue #13, which will be released in March 2022. Photo courtesy of Corri Seizinger; view more of their work on  Shutterstock. 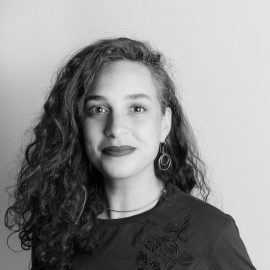