In my dream last night, my ex-husband had moved back into the first apartment we shared, almost ten years ago. A drafty attic-level one-bedroom. It was unchanged, down to the stains on the floors and the dents in the walls. My ex-husband was standing at the stove cooking something. His hair was falling in his eyes. He needed a haircut, like he always did. I sat at the kitchen table and watched his long back.

“Can you believe it was back on the market?” he asked. “The same apartment!”

“I thought you hated it here. You never stopped complaining about it.”

He took my head in his hands and started manipulating my eyeball in some obscure way, fingers pressing into the hard round surface of it.

He didn’t stop. I wrenched my head away. Whatever he had been cooking was now producing a black, acrid smoke.

I got up and left him crying in the kitchen.

It’s my day off of work at the bookstore. It is April and snowing. I can wander around my apartment touching things, my bed and my bookshelves, my coffeemaker and my cat. The beige walls of the basement studio I am lucky to have, the art prints I have hung on them to make them feel like they’re mine. I’m proud of my life. I’m proud of myself. I’m stable and independent and sober and none of these things were easy for me. Even so. There’s always this time from my early twenties that lives in my memory like a separate animal, more alive and active than any of the better things that have happened since.

No point trying to shake it off now, at least for a few hours, at least until the sun is up. I sit down dumbly on my bed. I wonder what I ever did with my eyepatch.

We got married in the spring of our senior year at UC Santa Cruz, day-drunk on a Tuesday, when we happened to walk by city hall. He was already accepted to the graduate school at Tufts, a PhD in Renaissance literature, and I was already planning to go with him. We thought getting married was hilarious. His parents were upset we hadn’t planned anything or included them. My mom said, “Oh,” and frowned, and kept any other opinions to herself. I remember these things like they were biographical facts I was reading about someone else.

In the fall we moved to Boston and I took the first job I could find, a receptionist position at a corporate law firm in the financial district. I mostly remember the commute. The snowstorms came early that year and kept coming. Everyone said it was an unusually bad year, unusual to get so much snow so early in the season. I got up hungover almost every morning, brushed my teeth, tried to get the wine stains off my lips, and went down to the street. It was cold enough to freeze the snot inside my nose. The sidewalks where we lived in east Somerville were a network of tunnels carved out of the dingy snow with snowblowers and wide plastic shovels. Everyone in the neighborhood had to walk single-file. The crowd had usually overflowed the platform and spilled up the stairs by the time I got to the train station. The delays got longer with each successive snowstorm, like the T workers were slowly losing hope. Eventually the crowd would press me onto a train where I’d sweat into my coat and breathe into the coats of others, my head spinning slowly on its pool of day-old alcohol like a lily pad, and try not to throw up.

Nobody in the office talked to me. I mostly looked at the internet all day. I read the Craigslist personals. I told myself I liked them because they were funny. Really it was that they were obscene. I liked seeing people shout their filthiest desires into the void. I felt a tenderness for them, a kind of communion through the computer. Sometimes I forgot I was sitting at my silent, sterile reception desk.

On my lunch breaks I made a cup of coffee in the break room and went down forty floors to the sidewalk. I popped my ears again. I stood there with my coffee and tried to get through two cigarettes before my fingers got too numb to work the lighter. There was a sign on the sidewalk in front of the building: CAUTION, FALLING ICE. They were in front of all the high-rises. It didn’t seem like a helpful warning to me.

When I came home from work my husband would usually be sitting at our kitchen table with his laptop and a mason jar full of Yellow Tail, the cheap Australian wine with the kangaroo on the bottle, which tastes like old water pipes or blood. As soon as I got in the door he abandoned his work and followed me around the apartment, telling me about how stressed he was, waving around his jar of wine.

He said, “You know who’s stupid? Deconstructionists. Deconstructionists are just the dumbest. They’re all, oh, the coercive power of language, and I’m like, ‘do any of you ever enjoy some cake, or watch a TV show?’” Or something like that. He said a lot of things.

I poured myself jars of Yellow Tail. I never remembered to pack lunches and couldn’t afford to eat out, so I was always starving when I came home. The wine distracted me.

Our apartment had two rooms with ceilings so steeply vaulted you could only stand up straight in a few places. The vinyl in the kitchen/living room was glued down unevenly and had bubbles that would squash down under your feet and pop up somewhere else. The windows were flush with the floor and let in a little light and lot of cold air. We didn’t insulate them that first winter. No one told us we were supposed to. We thought everyone suffered like this.

There was a fire escape out our bathroom window, a platform of metal grating propped on the building’s slanted tarpaper roof. We went out there to smoke. When the snow started in earnest we cleared it off with our hands and laid trash bags over the ice packed between the metal slats. We dragged the blankets off our bed and huddled under them for warmth. I remember this as a composite, a memory of all the many times we did it, and I also remember particular times that we did.

One particular time, I said, “You still like the poetry though, don’t you?”

He handed me his wine jar, flicked his nearly-done cigarette over the edge of the roof, and climbed back through the bathroom window. I waited. My husband came back out with one of his school books. He read me a poem, an Andrew Marvell poem, the one about the garden, tilting the book in the poor light.

He took his drink back absently. “I have to write six pages about it by tomorrow.”

On at least a few occasions it rained while we were out there with our blankets. The blankets got wet and we shivered under them all night. We didn’t stop dragging them outside. They developed a smell: rainwater, dead leaves, stale smoke, spilled wine, our own sweetly rotting alcoholic sweat.

To read this story, please subscribe to the print edition or purchase a copy of Issue #13, which will be released in March 2022. Photo courtesy of Carlos Marques; view more of his work on Shutterstock. 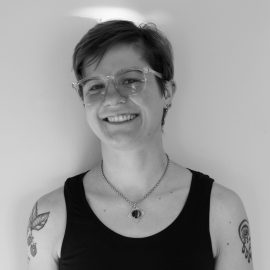 McKenna “Mack” Marsden’s fiction has appeared in New England Review and Pithead Chapel, and was awarded a 2021 Pushcart Prize for their story “Suffering in Motion.” In 2020 they were awarded a St. Botolph Club Foundation Emerging Artist Grant to work on their first novel. In an interview with NER staff reader Laur Freymiller, they …