The girls, strangers, look at each other between the crack separating the airline seats. They are eight and nine-years-old, and the only children on the plane. Their fathers, who don’t know each other, have brought them on a business trip, an unusual event. This is the first flight both children have ever taken. Sally’s father has just won a bottle of champagne for being the only person able to estimate the average miles per hour the plane is flying, given some limited amount of information provided by the pilot, who always, on this particular airline, offers this prize. Her father wins the bottle every time. He knows the mathematical formula. Whenever he comes home from a business trip, he and Sally’s mother drink the champagne together over dinner, and each child gets a small taste in his and her own wine glass.

Charlotte’s parents are divorced and she lives with her father, and rarely sees her mother. This makes her different from all of the other children she knows.

As the girls stare at each other, the way children who don’t know each other do, Charlotte reaches out her hand and Sally takes it and they both laugh at the frisson of the touch, unexpected, like the times Sally touches her tongue to her younger sister Bella’s tongue, which feels so strange, this thing that in one’s own mouth is completely ordinary but when touching someone else’s feels like a completely foreign object. So odd that as soon as their tongues touch, they always pull back in utter surprise. 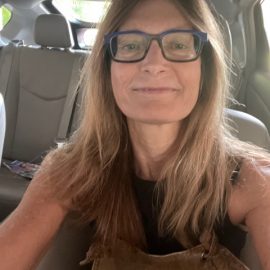 Susan Shepherd’s work as a producer and reporter has aired on NPR’s Living on Earth, PRI’s Marketplace, and on multiple daily NPR shows. Her writing has been published in the Boston Globe, Ploughshares and the Chicago Quarterly. Her short fiction podcast 11 Central Ave aired in Morning Edition on NPR affiliated stations around the country. …