Sometimes he seemed like an old man, other times like a little boy. When she met him in her class—she was his teacher, he was thirty-five and she was forty-seven.

Daniel Price. He had not yet learned how to perform the university way of being. Class issues, she told him in bed, and he laughed and said he knew but he didn’t care. He was here for the books, not for some kind of finishing school. He read to her from Michael Herr’s Dispatches, the only book he said that got the war right: Going out at night the medics gave you pills, Dexedrine breath like dead snakes kept too long in a jar.

Is that how it was? she said.

With his stump, he reached for her, then he pulled away.

I forget, he said.

You can reach for me any way you want, she said.

Now, at seventy-seven, she was retiring. Her letter came by Priority Mail. The retirement lecture for Kay Ballard. His name and address in her neat, precise handwriting, in an envelope that smelled like her.

He opened it with the Swiss letter opener she had given him. There, above the typing, a small note in green ink: I want you to be here if you are able.

He thought about that for a while. He was able. Briefly he had remarried, but that marriage, like the others, didn’t take.

What is it you want? his therapist asked.

He was thinking about the evening she spread a series of reproductions of yellowed letters on her bedspread. She said, I found this one in an archive in Dayton, Ohio. This one at the National Archives, this one at the Library of Virginia, this one at Gettysburg College. They all tell one continuous story, she said. Would you like to hear it?

She remembered being afraid to tell him that evening. The story involved a Civil War amputation. Would he think she was telling him so she could somehow make use of the story to manipulate him?

Or, worse, would he think he had entered into the room of a woman with some kind of crazy fetish manifested with such intensity that it permeated her professional life and her sex life, that it sat between them on the bed, monstrous face, hand and stump?

To read the rest of this story, please purchase a print copy of Story #5, Summer 2019 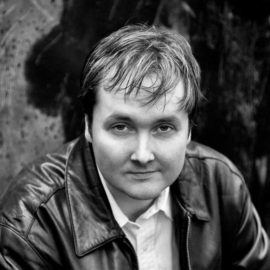 Kyle Minor is the author of two story collections: In The Devil’s Territory and Praying Drunk, winner of the 2015 Story Prize Spotlight Award. His work appears in print and online in the New York Times Book Review, The Atlantic, Esquire, The Iowa Review, Best American Nonrequired Reading 2013, Best American Mystery Stories 2008 and …