One morning, when Natalie Carver woke from troubled dreams, she found herself transformed in her bed into a Kafka story.

At first she thought perhaps no one would notice. She had noticed instantly upon waking that something was wrong, that the allegories were slithering just under the skin in a way that made it painful even to lift her hands to fasten back her hair, and that the sun through her window looked unbearably like the light in a prison. But her face in the mirror was just the same, and she breathed until she was calm and then went downstairs to breakfast.

But as soon as she sat at the table her mother gave her a look and said, “Well, I suppose you won’t be needing this, you don’t have the taste for it,” and took away the bread and butter that had been waiting for her.

And it was very sad, but it might be true, Natalie thought, for what was the point of eating if her mother could tell something was already horribly wrong. Her mother had a way of knowing these things – she’d taken food away before, whenever she’d looked at Natalie and hadn’t liked what she’d seen – and maybe Natalie had been a Kafka story then, too, and this was the only thing her mother could think of to do.

Natalie thought it over on the whole walk to school, where a young man – his name was Scott – who she’d refused to let carry her books followed close behind her, calling out to all her neighbors that she was something very upsetting now, and not to worry, he was leaving her quite alone.

“Smart thinking,” called one of her neighbors back, and the story inside Natalie tightened around her lungs so that it was a struggle just to breathe.

At school she had to read her history report, and though she’d hoped to avoid it Mr. Smith called on her first (of course he would, he could tell, now, what was running just underneath her, the certain doom with which she was operating).

Her report was on the life of Oney Judge. “Partus sequitur ventrem,” she said, and the words cut her tongue so that before she could go on she closed her mouth, swallowed as if to drain the blood before she explained that a slave mother could only ever bear slave children. There was a diorama element that was worth a full letter grade; Natalie had glued together a spinning Wheel of Fortune that mapped how Washington had rotated slaves out of Pennsylvania, to prevent them staying there for six months and thus being freed.

As she finished, Mr. Smith said, “Natalie, it sounds as if you’re trying to suggest George Washington’s contributions to the country were negated by him living by the standards of the time.”

She frowned at her paper. Had her Kafka story twisted her words – had insects fallen from her mouth? But no, they were there just as she had written them.

“These are only facts, this are his actions, there are documents,” Natalie said, the start of something longer, but she thought suddenly that she was late for a trial she hadn’t realized would occur.

“So because of some unfortunate actions, you’re saying Washington shouldn’t have been President.”

“No,” she said, “you’re misunderstanding me.”

Her teacher sighed and said, “Well, it’s hard to understand you when you seem so intent on contradicting yourself, but we’re all here and willing to try,” and Natalie wanted to shake her head and shut up about it, it wasn’t worth it to speak, but she was a Kafka story, and out of her mouth without her permission the words fell out, “If you were willing to try you’d have understood me.”

Of course that was true, but it wasn’t proof, and when Mr. Smith said, “That’s a false argument, Natalie,” the Kafka story knotted tight around her stomach, and she couldn’t speak, couldn’t sit down when he asked her to sit, couldn’t walk to the principal’s office until someone was sent to come get her.

“Papers, please,” said the man who came to get her, and she didn’t know what papers he was asking for; she was only certain she didn’t have the ones that would secure her release.

“I’ll have to take the forfeit,” she said – she didn’t know what it would be, only that she would be doomed to take it and to argue otherwise would mean she spent the rest of her life in this office trying to produce something he would satisfy him – and the man sighed as he pulled out a series of blank incident reports and began to write.

It would be a lovely thing, she thought sometimes, if everyone could see the story she was trapped by. She’d stopped talking, out of fear what the story would make her say, but that just meant it sat at the back of her mouth, dry and heavy and waiting.

She had tried to transfer out of Mr. Smith’s class, but the appropriate form was never in stock in the office and the secretary wouldn’t let her make the request without it unless she spoke to Mr. Smith for his permission. She didn’t dare – she was afraid that if she wanted to speak to him he would touch her elbow (he did that sometimes with the girls in class) and the story would shock him like an electric charge. She wouldn’t mind the trouble if he died; it was him living that worried her. If the whole class could see, then she might risk it, but she didn’t want to ever ever speak to him alone.

Even if there was only one of them conquered – even if it was just Scott, who had taken to walking behind her two or three days a week assuring the smiling neighbors he wanted nothing to do with her kind of people, and nearly brushing her hand with his hand as he explained to her how cruel she was being, how there was no need to look at him that way, how the neighbors would agree that he was leaving her quite alone.

It would be enough if she could turn around and open her mouth and knock him to the ground with the force of it, where he would think poorly of salesmen and find it so hard to get up that his legs would turn to spindles and she would come home for summer break and need only one good kick to send his flattened body skittering into the neighbors’ yard, under the azalea where no one would find it before it sank into the dirt forever.

She thought about it every day. She thought about it so much that the words pressed up against her skull, they pressed her eyes back into their sockets and made them ache so much that she couldn’t bear to open them all the way, and her mother glanced at her over the breakfast table and moved the bread out of reach and said, “You’re looking marvelously thin, Natalie, but you’ll never make friends in this world with a face as sour as that.”

One day she woke to the light through the prison window of her bedroom, and the story had settled so tightly around her that she couldn’t move.

There was panic at first – of course there was panic, it was horrible to be so still and leaden, horrible not to breathe. But it didn’t last long. When you wake up with something like this, it’s only a matter of time.

It was all right to be silent and still, she thought; to move was to attract attention, and everyone would decide it had been your own fault for moving. It was less of a weight just to lie here. She let it settle, and settle, and settle, until when her mother came to fetch her for breakfast, and was surprised to find her gone. 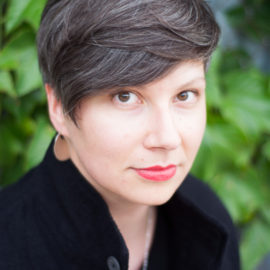 Genevieve Valentine’s first novel, Mechanique: A Tale of the Circus Tresaulti , won the 2012 Crawford Award and was nominated for the Nebula. Her second novel is the speakeasy fairy tale The Girls at the Kingfisher Club. Her third and fourth novels are the political thriller Persona and its sequel Icon. In addition, she has …