who had never even been kissed, that was the idea, not really a costume that was intuitive and then Oren got tired of explaining it and decided to take his prosecco and sort of wander. He did think he looked pretty okay in the scrubs, they were not his size but maybe they were supposed to come up around his calves at least a little bit and maybe his arms were supposed to do this monkey sort of thing where they poked out, but anyway it was Halloween and everybody was having a good time. Including him! Steve was around somewhere and he was always good for a laugh and this apartment was ridiculous, the sort of thing you maybe saw in movies and that only lately he had begun to understand therefore had to actually exist somewhere, since they existed at all to be filmed in the first place, and here he was. Obviously not in a movie. Also his height was a problem with the uniform, or whatever it was, and the stethoscope was the wrong touch, everybody thought doctor. There was art everywhere of kinds he didn’t understand but could appreciate, for example here was what appeared to be a poisoned helium balloon sitting at middle height in a girl’s bedroom. On the other hand maybe it was just a balloon. There was definitely a girl in the bed, and by then it was too late, he was in the room and looking stupid, stupider than usual anyway, the burble of the party down the long hall past the three or nine or whatever bedrooms and sitting rooms and in the big open area at the front of the place with its view on the city, everybody was down there. It was kind of nice, actually, to hear people from far away having a harmless good time. It was like being a kid again. Here was a kid being a kid for the first time. This was strange for her, probably, so he decided to sit down and here was where his height was a problem again, the only chair was a basically kid-sized chair, so his knees came up to his chin and the grunt woke her up, or anyway alerted her to his presence, and she rolled over in bed. She was about six or ten or so, somewhere in there, maybe say eight on average, law of averages, and her eyes were puffy and her nose was running and there were tissues everywhere in bed beside her, a bunch of yucky pets. “Are you my nurse?” she asked, and then she began to cry. “Am I going to die?” To which he had to say, “No, honey, you’re fine, it’s just a costume, I’m just Oren.” But a disbelieving fire was in her eye and anyway here he was in her room, looking like a nurse, sort of. “It’s a costume. Your parents are having that party down there. I’m not a nurse, I’m a lawyer.” “That’s a dumb costume,” she said. “I know, it’s all I had,” he told her, “Steve had it, his old girlfriend was a nurse and she got mad at him and left a bunch of stuff behind, including some old coins her grandfather got in the civil war, or something like that. I don’t remember.” He put down the prosecco and considered that maybe he had had just about enough of that.

To read this story, please subscribe to our print edition or purchase a copy of issue #12. Photo courtesy of Photographee.eu via Shutterstock. 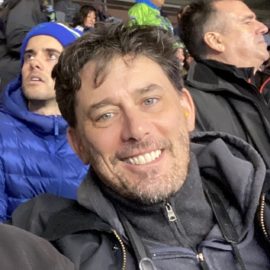