Macie’s knuckles felt cool on her eyelids, her hands silky from an evening of lavender lotion massages and drippy polka-dot manicures. She let them rest there—gently, barely touching—before digging them into the soft meat of her reddening eyes, then dragging them down her cheeks, through her tears. Leaving marks.

Settling into the bathtub, Macie stretched backwards, half-smiling as the faucet scratched the nape of her neck; smirking, despite everything, at how stupidly babyish her sister’s bathroom was: the Disney Princess Bubble Bath™; the Teen Vogue’s on top of the toilet; the beadboard painted pink to match the shower curtain, which smelled of mildew. Macie’s throat constricted at the misplaced favoritism, her smile twisting as thin, yellow bile crested at the back of her tongue.

She held it in her mouth alongside the disintegrating pepperoni, letting it settle into the angry red crevasses of her receding gums, feeling it sink in past faded enamel into her rotting roots—letting it hurt—then swallowed. Her dentist had said her molars weren’t going to make it through the year at this rate, then asked if she’d mind if he took photographs. Her doctor had focused on the middle distance, making a point of not looking at Macie’s breasts, her thighs, and asked her about the B-word.

It wasn’t that, though.

She shouldn’t have even been fucking born, Macie thought, wincing as the light shifted in the crack between the door and the checkerboarded puce tiles. And him. Fuck him too.

Macie’s gut doubled angrily in on itself, echoing first internally and then throughout the coveted bathroom as she clawed her stomach into silence. Holding her breath, Macie rolled the pepperoni across the roof of her mouth, feeling it’s ragged edges with her tongue—tasting blood and vomit—but the crack beneath the door stayed dark.

There was no heavy breathing, no eye in the keyhole. Just the absence of soft, wet footsteps.

Liz was Macie’s friend, and she knew this would’ve happened even if Ashleigh hadn’t been such a stupid baby of a bitch and ruined everything—but even allowing for all that, Macie thought, the stupid baby shouldn’t have been fucking born. The pepperoni was mostly spit by this point, so she swallowed it whole, barely tasting it as it slid past her rotting molars and down into the rising, roiling acid.

“Fuck,” Macie whispered despite herself, her stomach clenching like a fist.

This was going to hurt.

The first few hours had been fun—Macie and Liz had talked about who they hated most from their class and how stupid all the boys at their school were, except for Noah, while Ashleigh had played spa. Macie almost liked Ash, then: sitting cross-legged at her feet, silently painting their toes.

When they ran out of people to talk about, Macie had put on a movie, something that was supposed to be funny but wasn’t. Ashleigh and Liz didn’t seem to mind; even though Liz was supposed to be Macie’s friend, she and Ashleigh had talked through the first half, throwing stale Chex mix across the couch into each other’s faces, over-salted pretzels bouncing off freshly stained lips and self-whitened teeth.

Macie had breathed deeply and concentrated on being bored instead of angry. The movie helped, until, mind wandering, she realized their food had never come.

Turning off the television, Macie suggested calling the place—had called the place, when Ashleigh and Liz shrugged noncommittally, wearing her best approximation of her mother’s voice—but the woman who answered the phone said it had already been delivered. She had records, she’d said, challenging Macie with signatures, recounting their father’s prepaid order (“Chicken Pakora, Garlic Naan, Garden Salad…”—the salad, dry, for Macie and her problem).

“Do you guys,” Macie had said, muting the phone against her tightening chest, “should I, like, try to make them resend it or what?”

“Naan for me, thanks,” Liz had laughed. Macie—stomach rumbling—stupidly looked at Ashleigh for help. Ashleigh was an idiot bitch, but she knew about Macie’s stomach, knew she had to eat that stupid salad. “Naan, thanks,” Ashleigh had squealed, wild-eyed.

This is, Macie thought—noticing, while hanging up the phone, that Ashleigh and Liz were wearing variations of the same spaghetti-strap shirt—bullshit.

Liz, oblivious, powered the television back up, flipping to an old horror movie, something with Neve Cambell and that girl who looked like she was born from a cauldron. “If you’re hungry, Mace,” Liz had said, tearing herself away from the opening credits and Ashleigh’s insistent foot rubs, “I can help make something, okay?”

That sounded like a nice turn around to Macie, whose stomach was growling audibly, and she gamely laughed when Liz—rifling through the freezer—suggested ice cubes, then frozen crackers. Ashleigh, predictably sulky, haphazardly fast forwarded, stopping and starting the movie in a lame attempt to draw Liz’s attention.

Pout all you want, bitch, Macie thought, revelling in the shift, the sacrifice of her wilted Indian restaurant salad almost completely forgotten. She’s my fucking friend.

“You know, in the old days, if a witch betrayed her coven…,” the witchy girl agreed, trailing off into static.

Laughing to herself, watching Ashleigh ruin the movie from behind the kitchen island, Liz absentmindedly scraped the toppings the top off a frozen Supreme—a three-year-old back of the fridge special—while Macie gloated, then, realizing this victory would come with intestinal retribution, tried to remember where she’d stashed the Pepcid.

“Want me to preheat the oven?” Macie asked, working on her gastric karma as Ashleigh raised the volume in a typically passive-aggressive attempt to drown her out: “Have you ever heard of invoking the…”

“Yeah,” Liz laughed, replacing a final red pepper on the pizza with a flourish, inclining the cardboard tray up so the room could see her punch line. “Your oven goes to six-six-six, right?”

Ashleigh, pausing the movie, laughed too hard at the rough pentagram, which jostled with Liz’s shared amusement, the lighter sausages rolling onto the floor. Macie had joined Liz in the kitchen, not wanting to lose her to Ashleigh again, and snatched one of the frozen pepperonis, popping it into her mouth without any intention of eating it—afraid to swallow.

Unwilling to surrender, Ashleigh cradled her phone, intoning from Wikipedia in a spooky voice: “The pentagram is the simplest regular star polygon…. The pentagram can be constructed by connecting alternate vertices of a pentagon.”

Liz laughed at that, confusing Macie, who thought Ash was too stupid to even realize how dumb she sounded. Desperate to establish a demarcation between cool and Ashleigh, Macie grabbed the phone, clicking deeper and deeper into the darkness. Pentagram to Black Magic to Demonology, then blindly drilling through original sources, not pausing to scan the text of the links, her thumb propelled—inspired—as if gliding across a cracked touch screen Ouija, until, cradling the pepperoni in the bowl of her tongue, holding her breath, Macie found herself smiling triumphantly at a canted, blurry scan of what looked to be an actual spell.

Incanting the Mounstrus, it began, the n’s triple humped, the script frail and broken.

Macie handed the phone to Liz, who looked impressed, Macie thought, as she thumbed through the page. Macie did her best to project a cool indifference at Ashleigh as Liz set the phone on the counter, reaching for a bottle of flat Pepsi and taking a swig.

“You do it,” she gargled at Macie, tilting her head backwards to hold the soda in.

Macie and Ashleigh both exhaled, melting, as Liz took their hands, forming a triangle around the thawing pizza. Tucking her pepperoni between teeth and cheek, Macie took a theatrically deep breath and, smiling, appropriated Ashleigh’s spooky voice—“Emet Golem…”—but was startled into silence as Liz sprayed her Pepsi into the center of the pentagram, the spell forgotten in laughter.

Maybe this isn’t so bad, Macie thought, cheeks flushing red as the soda sank through the cheese and into the uncooked dough. The oven, pre-heated, announced itself, and Macie raised her voice, ignoring it—anxious to extend her moment in the spotlight. “Emet Golem,” she intoned through her smile, her voice as high and sharp as the still-beeping oven. “And He Breathed Into His Nostrils The Breath of Life And Became A Living Soul….”

The kitchen became suddenly airless, the breath knocked completely out of it, and Macie, quick to accusation, shot her sister a look… but could tell from the shock in Ashleigh’s eyes that neither she nor Liz was pulling their hands into the pizza, mashing their fingers into the wet, icy center of the pentagram; melting freezer burn from the fleshy strands of mozzarella beneath their palms.

The pepperoni warmed in Macie’s mouth, pulsing hotly against the back of her teeth, as the cheese cooked beneath their hands, not burning, but pressing urgently upwards. Liz laughed nervously, squeezing Macie’s hand so hard it ached, as sickly yellow tendrils wrapped around their wrists and fingers.

It was only when she felt him scream, thick and guttural from the oozing, mucinous mouth beneath their palms, malformed face rising with the browning dough, that Macie broke away, her jeans hot with urine, bile splashing the back of her throat. Crouched behind the couch, Macie stared at the three girls laughing on the television, paused—stuck in time—as the creature pulled itself from the crust, his awful, jagged shrieks mixing with those of Ashleigh and Liz as he enveloped them in his growing mass.

She’d stared at those three girls until the shrieking stopped, stared for seconds; for years… getting angrier and angrier as she rolled the pepperoni across her aching teeth, her mouth watering, despite herself, at the smell of baking cheese. Finally, the creature finished, padding heavily, wetly toward her parents empty bedroom, bookshelves and coffee tables toppling in his wake. Tearing herself away from the television, Macie had worked up the courage to peer over the top of the couch, had looked at them for a long moment as if they were also paused: two unmoving girls, splayed on the floor, arms and legs at impossible angles; their matching shirts nearly transparent with grease, their bloated faces streaked with tomato sauce and blood.

Sprinting, quietly, on the balls of her feet, not caring about broken glass or the rub of wet jeans, Macie instinctively made for Ash’s “Princess” room on the far side of the house. Locking the door to her bathroom, hyperventilating, Macie collapsed in the tub, vaguely remembering that a tub was the best place to be in times of crisis.

The two dead girls imprinted in negative on the back of her throbbing eyelids as she pressed down with her knuckles. Crisis was too gentle a word.

Enwombed in pink tile, smelling of fear and mildew, Macie pictured Ashleigh and Liz in heaven, friends forever, and—shaking—grieved. Her tears ran hot and freely, mixing with snot; collecting on her lips, which she ran her tongue across reverently. These tears are for you, Macie had thought, magnanimously looking toward the ceiling, letting go of her anger in convulsive spasms; noticing, bile rising again, the red cap of her Pepcid peeking out from beneath a pile of astringents and conditioners in Ashleigh’s overflowing shower caddy.

That fucking bitch, Macie thought, smiling dully at the the prospect of relief; flipping the pepperoni with her tongue. Working up an appetite. That stupid, fucking bitch. 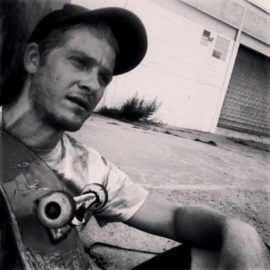 Nick Courage is the author of The Loudness (2015) and Storm Blown (2019). He is a New Orleans-born writer (and aspiring skateboarder and baker) who splits his time between Brooklyn and Pittsburgh, where he lives with his wife and two cats. His writing has recently appeared in Full Stop, Writer’s Digest, and The Paris Review Daily.